I have been playing my Cephalyx at every chance I get, and am very pleased with their performance. I currently sit at a very comfortable 5-3-1, with the one draw coming to time. I’ve played 25, 35, and 50, and have used every model at their disposal. With the switch back to Cryx looming on the horizon for September and October, I felt it was time to go back and evaluate what I’ve been doing, how I’ve been learning, and what I like or dislike about the Minifaction of Cephalyx. 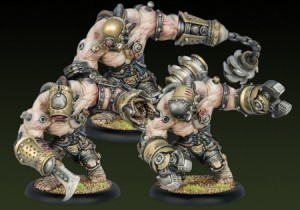 Monstrosities
The Monstrosities stand out to me as the flagships of the army. If you have no desire to play them, there is no real reason for you to play the faction as a whole, its just not going to be worth your time. All three monstrosities are exceedingly good.

Overall, I am really trying to figure out a way to keep everything and add a fourth Monstrosity. I don’t see how I can do it without causing my list to crumble, bit I think its possible. I could go Double Warden Double Wrecker, but it is most likely to be a Subduer. Those 36 boxes are much hardier than any of my opponents thought, and it almost always required the expenditure of more force than 6 or 7 points warrants.

Solos are the next most potent addition to the way the Cephalyx play this game, even there is really only one, I’ll cover the Dominator here as well as the Cryx Solos.

Overall, I think the solo selection is really fantastic. I had hoped that the feat and TK would help out the bloat thrall, but it simply highlighted its inaccuracy and its ability to destroy my own troops.

Units are a pretty simple thing to go over. Thankfully, I’ve been able to use them all extensively.

The units are the backbone, where the solos are the ligaments and the Monstrosities the Muscles. I am still tweaking how and what proportion of units I run, and am very solidly considering running 2 mins of each unit for flexibility. It might be terrible, but I am going to have to try it.

Finally, the Brain of the Operation, in both form and function. Exulon Thexus, the Warcaster himself.

The army overall is fairly close to what I expected after reading the spoilers, but has some aspects I didn’t see coming. The Subduer just isn’t pulling its weight, and Thexus, for one, seems to be much less involved in the games I’ve played. I didn’t consider a Hex Blast Assassination as a thing until I did the math, but there are times when it’ll be very good to drop a pile of damage on their caster, provoking a flight or flight. The Warden seems to be the perfect arc node substitute, at 6 points, but his large base size and slow movement are really hampering him from being a good stand in.

I cannot wait for the next caster, and the final reveal of Thexus Theme list. I’m not sold on ambushing Drudges, but I’ll try them a time or two before I put them aside forever and ever. I’m also very likely going to end up picking up another Agitator and two more boxes of Drudges. I do not look forward to painting them, though they will likely be easier now that I have my palate pretty much picked out

If you come down to NOVA, make sure to hunt me down and get a game against the Cephalyx, who will hopefully be fully painted by then. finishing off the Overlords and Agitators sometime this week! Oh, and don’t forget to follow me on twitter for random tidbits and updates.

Gearing up for the NOVA open