Its happening, and I can finally see the light. I’ve been called back to the Skorne Empire, and can see vast swaths of infantry, huge bipedal pachadyrms and tyrants shouting over the din of battle in my future.

First, however, I have to get my last hit of Cryx in.

There is a tournament in the area, at Titan Games and Hobbies, on the 20th, and I have given it over to a fellow PG to run in order that I, too, may play this game I love. Over the past few months its just not been possible for me to get the amount of games I would like to play in, and I am starting to feel extremely rusty, again. After my shift from Cephalyx, I managed to stick with a single caster – Goreshade the Bastard, and I think I want to continue the theme.

I’ve a real feeling that the Warmachine gaming scene here in MD is going to pickup, what with the announcement of the Brawltimore Tournament Circut (Thanks, John and Andrew!), and while I’m not able to qualify, I am still going to end up playing in some of these tournaments to keep playing at all. So, for the Tournament coming up I’ll be leaning heavily on the Goreshade list while also keeping my Deneghra list on the side just in case.

This list is somewhat a vision of an alternate world Cryx army list, with two units of infantry and three beefy jacks. While I can’t wait to try this list out once the Inflictor comes out and pops my ‘jacks ARM to 23 and adds both Reach and Critical Poison, I’m really enjoying playing the list right now. With the Bane Knights, Nightmare, and Bane Riders, I don’t particularly see myself having problems with armor. This is also a completely Hordes based drop, and will suffer against something like Cryx, Convergeance, or a Zaal Theme list. It’s a grind em down list, and I think I can play for scenario in most games, with Goreshade and the Jacks taking zones while Doods run interference.

What does worry me, though, are casters that are just going to sit back and take me apart bit by bit, and I think I have a solution to that mess. Enter Deneghra, Assassination Queen

I think she’ll have tons of game against a number of casters, with long range shooting and assassination vectors everywhere. Unlike most games, I can likely pick of a bunch of models before needing to dedicate the Nyss Hunters, Aiakos, and the Witheshadow to combat.

That said, I do have a number of questions that I am going to have to ponder over the next few days:

So, thats what on my mind regarding my last set of games for a while with Cryx, and I hope there is a good showing at the tournament – I’d like to get 4 games in.

In that list is a unit I’ve been working on attaining for a long time, but have had problems due to significant issues with the heads of the models. I think I may have found a solution. Much like my Bane Spartans, I am going to do a few things to the models to make them more palatable and enjoyable. I am turning my Nyss Hunters into Ninja!

I bought some Katanas from Shapeways, some Wildwood Ranger heads from Ebay and am going to have a go at replacing their swords and heads.

I also have some extra Preatorian Swordsmen weapons as well, if the Katanas don’t work out.

After this tournament, though, I am going to focus on Skorne for quite some time. I have a number of lists I want to play, and I’ve not used a number of recent releases.

I’ve mentioned my intention with the Fist of Halaak, so I won’t go over that again, but I am extremely interested in trying to do some fairly awesome things with his epic Incarnation, the Fury of Halaak 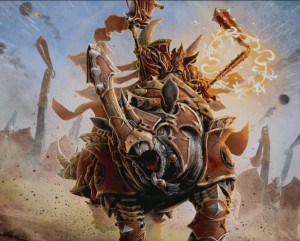 My gut instinct, as always, is to go balanced with him. He easily supports awesome beasts with his Warbeast Bond and Mobility. He has a brutal first strike if he brings along some ranged models due to his Feat, and he can assist in lighting the world on fire with Ignite.

After just a few minutes and some strange changes, this is what I came up with:

This is where I feel my absence from the Ranks of the Skorne Empire for such an extended period of time – I just don’t know what is right. Everything in Skorne appeals to me in such an freaking awesome way that I can’t explain it. So, With that, I just grabbed a bunch of stuff that I don’t think suffers from Skornergy and can actually cause problems for my opponent.

First, we’ve got the beast loadout:
While Xerxis II calls out for a Krea, I had to leave her at home to include Tiberion, an Archidon and a Gladiator. I still, after years of therapy, cannot leave home without a Gladiator.  While Xerxis has Mobility to offset some of the slower titans, an extra +2 speed and even more pathfinder can’t ever hurt. Tiberion is amazing, and with a significant charge threat of 13″ at P+S 22 he is a beast to be wary of. Finally, the Archidon is bonded to Xerxis to give him a speed 9 sprint so he can commit and reposition of needed.

I then grabbed the infantry I feel the most comfort with: Praetorian Swordsmen + UA and Venators + UA. I really like the swordsmen with Ignite. Even after the minifeat turn, I can move in and drop 2 P+S 11’s with Critical fire into lightly armored troops or a single P+S 14. With two chances to proc critical fire, it’s double the fun, especially on his feat turn. Venator Rievers are just a solid, go-to unit for me and I have a hard time leaving those 11 points behind. Reaching out and annihilating the front ranks of troops or the deep, juicy support is just amazing, especially for Skorne. These two I think support each other well with sidestep allowing the to move out of the way if they are in a position to block LOS.

Finally, I grabbed a few of the standard support pieces in the Tyrant Commander, Mortitheurge Willbreaker, Saxon Orrik and 6 beast Handlers. Beast handlers are a pretty self explanatory choice, and the Tycom always manages to show up – though for this list he is generally going to be making sure that the Venators walk 8 to shoot, which has been glorious before. Saxon is here to aid the Tyrant in giving out Pathfinder if needed and being another gun. The Willbreaker serves multiple ppurposes as always, but he is especially needed after the feat turn to enable either forcing outside of Xerxis control area or to make it so that Xerxis can activate in a more advantageous manner, with his 10″ control area.

So, Hopefully I’ll be able to get a number of games in here soon and start wracking up some experience with Skorne, getting comfortable and getting back into the groove.