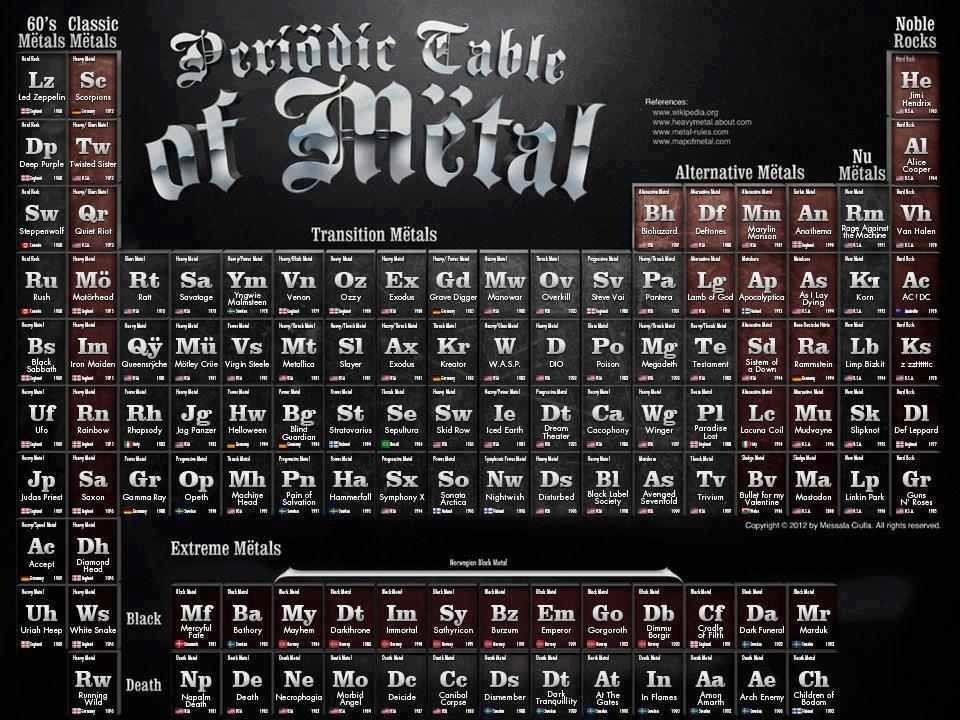 You ever wondered what I thought about certain metal bands, What I like and don’t?
Well, here you go!

I’ll be listing here the bands I’ve listened too and what I honestly think of them. I’m not going to get every album from every band, but I’ll be updating it from time to time. I’ve only done the ones from a recent Best of 2016, currently, but I’ll be getting more in there.

Anciients – Good music with vocals that aren’t dissonant. The album both growls and sings, but they don’t reach that uninteligable level of Growl. Very much enjoyed and recommended.

Rotting Christ – Strong opening, medium paced, vocals are understandable, yet still rough. Very metal without leaving the audience behind. Continues its pacing and clarity throughout the album. I liked this one enough to add it to my playlists.

Gojira – It is a very solid album. I like it, it’s enjoyable, but it didn’t blow me away. Good enough for more than a single listen, but not stunning enough to put on repeat.

Testament – Right up, in your face, fast, hard, meaty. Just my level of grit and growl, howling yet understandable. Straight up metal. Good stuff. Not a long album, but strong. A little timid at times, with a very Stones-esque vibe on a song or two, but overcomes that pretty swiftly.

Insomnium – This album is a single song, but its very cool, a low, grinding, 40 minute epic in the vein of a more subdued Amon Amarth. Vocals are a little bit distracted and garbled with a little more grumbling incoherently than I enjoy, but good nonetheless.

Devon Townsend Project – Interesting and different.The Haunting voice that works within the music. The albums sounds are strong and powerful without being overbearing. It feels  good to listen to and rocks out strongly. I enjoy it and recommend it.

Eight Bells – This album, and really this band, is very haunting, very cool. It has a distinctly slow metal sound like nothing I had heard before. Good overall, but not something I’d want to listen to all the time. I wasn’t able to find the whole album to review, but what I heard was good enough to intrigue me, and good enough to think worth giving a shot.

Albums I am Apathetic Towards

Meshuggah. – Meshuggah has always put me off due to their vocal style, and this album is no different. It is filled with growling, scratchy unintelligible voices that from time to time just yank me from the awesome and powerful instruments. The Album was ok, but the vocals really kill it for me.

Korn  – This album has a bit of a different sound than I am used to with Korn. It is a solidly metal sound, but I don’t really consider the album metal. The voice of Jonathan Davis really brings me out of a metal mindset and really reminds me who the band is. Its not good or bad, but its not really metal.

Baby Metal – I’ll be the first to admit I didn’t expect to like the sound of baby metal, but it has some good atributes. There is one of the three vocalists that I really like, but sadly its not the Lead. Her high pitched voice just doesn’t do it for me. The music is good! Its speedy, up-tempo, and powerful stuff, but I just can’t get behind it. I can see why others like it, but its really not for me.

Vektor – This band has massively awesome speed and pacing. I really liked the instrumental portions, but the vocals are just killing it for me. There is so much awesome here, but the vocals sound to much like their a throat in a vise for me to really get into it.

Avenged Sevenfold –  Surprise, an album by A7X is pretty average. I like the songs, but nothing do not stands out as anything noteworthy among their catalog, or each other. The album is much more rock than metal, and doesn’t have that hard, feel. The vocals are awesome about 30% of the time, but the rest just doesn’t impress me.

Opeth Sorceress – I Get that this is one of the original metal bands, but they really sound like it. I felt as if they grabbed a stoner rock/Early metal album and brought it to the future. I’m sure its good, but It’s not my type of metal.

Exalt – This album has a lot of adjectives for it: Crunchy, loud, slow, growly and Dark. I didn’t mind the music, but I also didn’t really remember it. The album seemed extremely short. I didn’t like it, but I assume its worth the look.

Twilight Force –  I was very, very much looking forward to this album. Sadly it was to light and fluffy, without enough hard, hammering metal music. I don’t know what it is, but this doesn’t feel metal. Something is clearly off. The vocals are fine, probably too singy and not enough weight to them, but I’m not sure. Eh? It’s good, but I don’t dig the choral aspect, the vocalist, and the overall high, lilting sound. Its better than some here, but I won’t be searching them out anytime soon.

Nails – This album was grindy, short, and had no real lyrics. It wasn’t particularly memorable or even good. The lyrics are barely count as such. It’s another one of those cacophonous album that gives metal a “bad name.” I will be seeking out exacty 0 more albums of theirs.

Deathspell Omega –Here is another grumbly, growly and unintelligible album. I get why this was considered good, I think, but It is very much not my type of metal. It’s a cacophony of unintelligible, distorted and confused sounds. Definitely not an album I will listen to a third time.

Abbath – This album starts off strong, brutal and fast, but when the vocals kick in they are growly and gravelly, a bit below where I want them to be. The album is tolerable, but not something I’ll reach for. Tempo and Pacing of songs is pretty excellent, though. Takes a bit for the vocals to grow on you, but they kinda do.  Their songs seem to overstay their welcome, stretching in length beyond necessity.

King 810 – Not good. I don’t know what else I want to say about this. At least its not The Body? Unremarkable, repetitive, with no single moment to latch onto in the whole album. I recommend listening to this at least once, and then telling me what you think. Then I can decide if you’re worth having conversations about metal with.

The Body – Ugh. This is… not good. It’s dirty, terrible slow sound is like two feed-backing speakers screaming orgasms as they grind on each other.  It’s just simple, reductive noise and screaming.  I recommend this to no one with ears. Ever.