I know that there are some large number of people out there who are getting disappointed or aggravated with Soda Pop and Relic Knights. The story has been one of unending problems and repeated broken deadlines. They are trying, now, to get our hearts back by offering a free model to all backers: Candy Heart. They are currently running a poll for which of the two versions of the model you’d like to see go into production. They will then give all backers $15, and they can buy Candy, or whatever they like.

But I’m here to look at the rule book today. The small, digital download that’s available to anyone, right here. Now a days, this is one of my “must haves” for a miniatures game. If I wasn’t involved in Malifaux and Warmachine, I probably wouldn’t get involved today. The ability to judge a game before you buy it is crucial. This is especially true in a genre that generally has $50+ rule books, and $100+ starter boxes. You want to know what your getting into before you get bit in the ass.
I learned from WWX, boys and girls.

Now:
Relic Knights: Darkspace Calamity
The first, and core, book in the series of expansions doubtful to come in the Relic Knights franchise. With over a year of kickstarter blues, it had better be good. Thankfully, like other online books, its fairly to the point. Its simply the rules, and not a whole lot more. its 32 pages of reference, rules, and scenarios. All the pictures are reference images, and there isn’t a single fluff image. Its good to keep down the documents overall image count, as people inevitably print the book out.

It jumps right into the game, as it should, starting with the definitions, and its all standard stuff here: Models, units, cards and their associated descriptions, the Deck, Terrain and measuring tape. Where this diverges though is the Dashboard and the Objects. the game gives a rules point for objects, and lists them as anything on the playing board: Terrain, markers, models… everything. Its something that I’m surprised games hadn’t come to define yet, honestly. The Dashboard is where some of the most intriguing parts of Relic Knights shine, making a kind of mobile initiative order I really dig how this works, and it goes right into the Key Concepts, including the dashboard.

They include a diagram of the dashboard, because its a complicated concept. 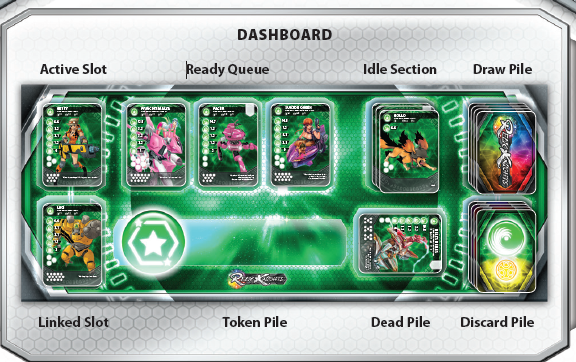 From left to right: The Active slot is the card of the model you’re activating next. The Ready que is your intended order of activation after this model, provided your opponent or you do nothing to mess with it. Then you have your Idle Section, where all models that aren’t either active or ready lie. The dead, discard, and Draw piles are fairly self explanatory. The linked slot is a model that’s been dragged from the Idle pool to here because of its connection to the currently active model.  Only models with the Linked rule can do this, which is not how we play tested this. we had all Cyphers linked, and that was really, really powerful.

I really like this system because it creates an interesting dynamic in the game. The game, instead of focusing everywhere all at once, tends to focus on single “battleground” areas as each player tries to activate only relevant models. There is no benefit in this game to having units that are not immediately important activate. I really think that a lot of the dynamic of the game is going to come in when one person is applying pressure and taking the initiative, and the other person trying to resist the pressure and take the initiative back. Its chancy to let the opponent activate two models, uncontested, in a row that are trying to achieve his goals while you try and activate something across the board.

The Rule book then covers movement, and its really appropriate. One of two unique movement rules of the game is that no model, token or marker of any type may be assisted in standing. If the model can’t fit, it does not commit! The game is going to focus a heavy amount on movement and maneuvering. with unlimited ranges, and no random-chance attacks, if your vulnerable, you are definitely going to get smashed.

Oh, what, you didn’t know about the attacks? Let me help! Later on they go more in depth, but here is the low down:
there are no random factors in the game, outside from your drawn hand. I feel that this is much better execution of a card mechanic than Malifaux: Malifaux rewards card counting in order to make sure you have your opponent on a bad foot. Relic Knights does not.

this is a sample attack, pulled from the rule book: 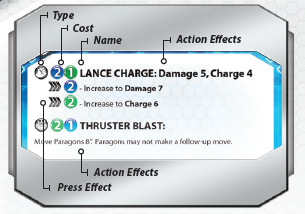 You’ll see that there is simply a cost, and then effect. You must pay 2 blue and one green Esper from your hand, and the action succeeded. Notice, as well, that there isn’t a range. All ranges in this game are based completely on LOS, so make sure you move to the right spots. You’ll also notice that there are additional costs, called presses. if you pay 2 more blue (in addition to the two you started with, not an easy feat) you get +2 damage. If you Pay 2 more green, you increase the charge by +2. All of this adds up to a game where if you can see a model, and you have the right cards in your hand, your ability just works. To alleviate that, there are defensive abilities with the same structure, so if your opponent has the ability to defend against something, its just going to be defended.

Right, back to movement!
Another key aspect of movement is that larger bases can move through smaller bases and smaller object as if they do not exists, though they cannot stop atop them. This is a very cool aspect of the game that, while not necessary, is pretty interesting for the 80mm Relic Knights. The rule book goes on to define the different types of movement types, and then starts to cover LOS. Relic Knights uses a concept I’ve not seen before, and that is the LOS window.

Its a simple concept covering the whole of the area between the models edges, as seen above. all of the cover and to hit modifiers are based on this window. Most games use this, in practice, but don’t cover it in the rules as explicitly. They then have two pages of terrain examples, which wile confusing to read, make sense in the context of the rules and the diagrams.

page 10, about a third of the way through, introduces us to the Esper Affinity and the Esper deck. Outside of two rather cryptic messages, this is our first look.Each faction is tied to an Esper color, called affinity, and they don’t all make perfect sense. I do like that I get to play the chaos Faction, this time around. I so very often play the Lawful types.  The deck contains cards of every color pairing, as long with dead cards (void) and All cards (wild) these are what you draw, 5 at a time, to determine your hand, and if you can activate your abilities or not.

The next section is on model abilities and Esper actions. While the abilities work pretty much as you’d expect, the held Esper is essentially “double wildcard” Esper, allowing you to spend it as any two Esper you desire, but only on the model holding it. You attain held Esper by sacrificing your action earlier, so while it can be a real boon, its not perfect.

It then goes into Markers, Tokens, and AOE’s, all of which are vastly different from other games I’ve played.

Markers are boosts and objectives, and are counted as models for almost all purposes.

Tokens are flat notations of where an Zone, Item or important location is. Its not considered a model.

AOE’s are persistent effects that extend from the edge of the base in all directions. When placed, the Token for an AOE must be within the LOS of the model creating it, is considered part of the AOE, and covers 3″ from every edge of the token.

Thats the last of the basic rules, and then the book jumps, after 13 pages, to playing the game. it goes over setting the battlefield, the cards and the ready que, and also touches on deployment.

The dashboard is used to control the turn, with the ready que model moving to active, and that models turn resolving.

Models get an initial move, an action, and a follow up move (I told you this game would focus on moving!) Both moves are defined on the front of the card, and the actions are self explanatory.  A player also has the option to refocus, which takes place of the models whole turn, but allows the active player to draw five cards, and the model gains a held Esper. Once the models turn is complete, it moves to the idle pile. The player then moves the ready que over, and can choose a card to fill the newly opened rightmost spot. This means that you can keep activating the same 4 dudes over and over again, and I really see this as the main means of applying pressure.

the rule book then goes into describing what action types and troop types their are, but its all fairly typical nothing that really stands out. Formation is a strange beast, and one that I am well used to abusing from MKI Warmachine, but that is what it is.

Applying damage to squads deserves a special mention here, because its not how I am used to resolving these effects. When a unit is targeted, every model in LOS and within 6″ of the targeted model can be killed by spillover damage. I think that is going to make keeping units alive a real chore.

the final area of interest today is Terrain. I don’t see anything completely out of the ordinary here, with difficult terrain, Cover, and open ground and it vagaries pretty clearly delineated. They did decide to go with assigning an amount of armor bonus to the terrain, with dense woods granting 1 armor, all the way up to bunkers granting 4.

The book then ends on the victory conditions, scenarios, and abilities list. I’ll hit scenarios later this month, but I wanted to make it through the book here today.

Overall, I really like how the game shapes up. Its different – with tons of movement and with very little to measure outside of the movement of a model. I really can’t impress enough upon anyone that I find that this is the best way to use cards as a resource in a miniatures game. Drawing them is hard enough, having the right model to use the right ability at the right time is downright blasted hard, and THEN having to hit some number, either a defense or an activation number even if you have the required numbers is a pain. This system of having your powers simple activate if you pay for them is refreshing and interesting. The ability to move through other models and objects on the field is another really interesting aspect of the game. I don’t think it will have a ton of affect on the game, but it will indeed have enough that I’ll enjoy the rule.

While its taken them forever and a Tuesday to get these models out the door, and we are not even there yet, I’d really encourage those of you who have backed the kickstarter not to give up. Its an interesting enough concept that I think it’ll really grab hold in many places. It might not rival Privateer or GW, but It might give some of the other fringe games a run for their money!