I’ve been playing D&D for nearly 18 years now, and I’ve enjoyed all but a few times I’ve sat down to a table with my friends. I enjoy getting together with friends, shooting the shit, and playing monsters and heroes. I’ve been DMing for almost that entire time, and I’ve run my fair share of adventures, from years long campaigns to 15 hour one shot adventures. I’ve found different ways to turn tropes on their heads and I’ve built a huge mythology in my mind and in the players games that have affected the world I created.

But there has always been that one adventure I’ve wanted to run, that I’ve wanted to send as many poor sods through as I could. Against the Giants is that mythological adventure for me. Gary Gygax ran the first one, with 15 people going into the dungeon, and only 2 coming out. It was later cut up into three separate adventures, and published as Steading of the Hill Giant Chief, Glacial Rift of the Frost Giant Jarl, and Hall of the Fire Giant King. I’d poked and prodded around, looking at them here and there, but never got all to serious with them until recently.

They’d repackaged the adventures along with a pretty sizable campaign chunk, back at the 25th anniversary of D&D. However, that was at the very tail end of AD&D 2nd Edition, and after that 3/3.5 kinda took off. With the adventure so hard to convert, it sat as only and Idea through all of 3e, and all of 4e, and was only given life again once the 5th edition/D&D Next started rolling around. It looked to be the right feel and spirit, and was really easy to convert over, as 5e did a ton of reversions to the 2e concepts.

I bought the booklet, Borrowed the pdf from one of my many internet friends, and set out to convert the game over. It was going to be glorious!

There was a problem, however. In the time between 3.0 and now, I’d very much grown to love the miniatures game hobby, and had thoroughly embraced the miniatures in D&D aspects that 3.0 and then 4e really pushed. That meant, if I was going to run this how I wanted to, I would need a whole boat load of Giants.

Enter Reaper: Bones – The Kickstarter. Though I had picked up a few of their giants before, Blorg, Lunkh, and the general Hill Giant, they weren’t going to be near enough. The Bones Kickstarter, however, offered a ton of new models at good prices that I could get with a pile of other goodies.

Now, I’m starting to paint them up and get ready for the gameday ahead. as I plan on going in as deep as I can into the module in a single day, I’ve got to have them all ready before the day of the game. The first one I picked to paint was my favorite giant model of the bunch, the fire giant bodyguard, I finished him up just the other day. He waits on his king and queen, next! 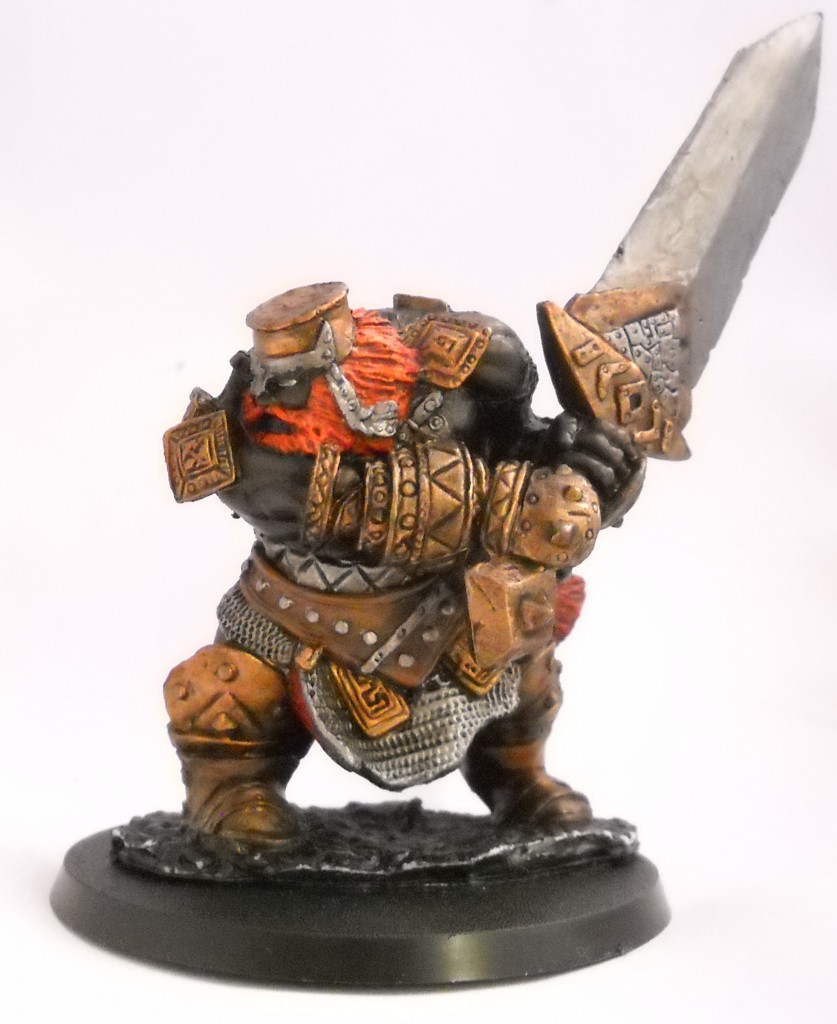 I’m still suffering from picture quality, and its starting to get to me. Nothing really seems to make a difference. Maybe one day I’ll figure it out.