While I’ve repeatedly introduced my current D&D character: Clovis the Gremlin (in the first day I changed his moniker from Brutal to Gremlin on a whim. Sue me.) I have not expounded on his further adventures and expiditions, nor have I rounded out the cast of characters he’s been running with. So Lets start that.

The Adventure we’re playing in is pretty detailed. Our DM has beenworking on it for some time, and getting us involved has been a little bit of a chore as all of our characters are fairly disparate in race, motivation and even ideals. We’re all pretty grey characters, though. No one is really sticking out as the beacon of hope and goodness that many games have.

We’ve all arrived, in our own way and time, at the town of Frontier, on the edge of known human civilization, the boundaries muddy with both the dwarves and the elves (as I understand it), though both are friendly enough to trade and still maintain a fairly strong peace.

Clovis, my character, has been sent out the frontier to find new and interesting herbs, mushrooms and other extracts with which to make poisons and other noxious things. He’s a follower of the god of snakes and poisons, an adherent to both fate and omens, portending the world ahead of him. (Gnome Monk/Rogue)

Garret, the ostensible leader of the group, is a fairly rambunctious and easily distracted Halfling who’s penchant for sorcery is only barely held in check by his inability to control it for any length of time. His wild magic is an ever present fear in those who know better in the group. He’s been sent to frontier for the safety of others. Hopefully he learns to control his latent powers before he destroys something important. Which is less likely to happen in the middle of nowhere.(Halfling Sorcerer- Wild Mage)

Mamodune is our local guide with consummate knowledge of the forest and its inner wildness. Where Garret and I are both city kids of some degree or another, Mamodune has lived a decent portion of his life outside the city walls, and is comfortable in both conditions. (Human Wizard – Mystic Theurge (Grave)/Ranger)

With us is our Half Orc Companion, Urath Bashan, who’s goal in life is to hunt down and destroy unsanctioned Arcanists. He is a bit dour, though humerus, and a large part of the party, mostly physically. A dominating individual compared to most of us. Little is known of his back story, as he keeps to himself most of the time, for his own reasons of course, and none of us have really had the gall to prod the half orc on his backstory. As a land outside of most jurisdictions, Urath believes that the best place to find and eliminate renegades is in the back country. He is likely not wrong. (Half Orc Celestial Warlock)

Lastly comes the tagalong, amusingly named Tag. He’s a swashbuckling noble from a far away land who’s made his way into the group cheerfully and gladly, though none of us really know what he’s here for. He is, however, an excellent swordsman, though he seems primarily driven by greed, seeking his fortune out in the last bastion of civilization. (Half-Elf Swashbuckler)

This portion is really amusing to me. You’ll note our class composition isn’t something you’d strive for in many hero-adventure games, and is one that people will, and rightly so, call lopsided. Each one of is can bring a world of hurt to the opponents all while being extremely squishy. Monk, Rogue, Warlock, Sorcerer, Wizard. Compounding all of that, we don’t have a ton of healing either. Its a situation where we have to burn down enemies fast, and hope that we don’t simply wipe with a bunch of bad attack rolls or saving throws. This is the exact opposite of the last adventure, which I ran, where the group was simply a bunch of tanks: Fighter/Barbarian, Cleric, Fighter/Abjuration Wizard, Paladin, Barbarian/Ranger. They couldn’t sneak anywhere, and were’t great at dealing damage (except the Paladin, and often the Fighter/Barbarian) That group, though, was a colossal damage soak. They had the Paladin aura to saves, counterspells, High AC (lowest was 18, by the end) and a huge HP pool. Its such an amazing difference, I can’t but assume its a reaction to the old party.

The setting has some features that make the adventuring party pretty interesting, with the most prominent being that all Arcane Casters (Wizard, Sorcerer, Warlock, ect) all are required to belong, and are recruited to, a single organization called the Conclave. They join one of the colleges and walk their path, wedded to the institution of the conclave. In many groups, this could simply be a backdrop, where one of the characters is a member, but the rest simply know it. In our group, however, not only are three of the characters Arcanists, one of them is even a member of the Inquisitors, hunting down unauthorized magic users and eliminating them either through recruitment or elimination. This means that we cannot, at any time, escape the eye and the rigors of the conclave, and I think that is an interesting direction our group has happened into, and one that could be played up and made extremely entertaining, if the DM wants to go that way.

Over the last couple of adventures I ran, I feel that I had lost something in what I was doing, and I think that it is making the adventure about the characters. While the adventure can always be run, the end result should speak to who the characters were, those who went on the quest and came out the other side. It should be solely unique, and that may be something I need to chase again. This party composition, with Conclave, and rogues and an Inquisitor, could easily turn renegade hunting into an art form, and It would be nearly unique to this specific composition of characters.

We are also at the edge of the world, where the old and new meet, and where there are perils everywhere. There are chances for encounters with Elves, Dwarves and the Gobliniod races to be both positive and negative, and there are masses of unexplored (for humans) area to wander around and “Discover” for our kingdom, though few of us feel tied to the kingdom in any way, so that could be hard to get us motivated to do.

Garrett and I were the first to meet, and it followed quickly thereafter with Urath and Mamodune, and Tag the next morning. We had all, through various means, heard about the local bounty on the heads of a goblin tribe down the road away who’d become annoying to the local caravans. While Clovis has absolutely no interest in the bounty itself, he believed that the best way to find new herbs, poisons and other flora that could be useful to the monastery was with the protection of a few people who could watch his back while he picked flowers and looked at mushrooms. So a few goblins have to die for him to achieve his herbalism goals. It couldn’t be that bad, could it?

Until next time, where I go into a goblin den and hope to come out alive.

Bump in the Night 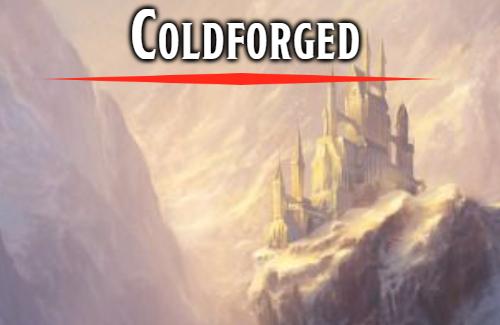