Another week, another game with Thexus. The Cephalyx are a very, very interesting army that has a ton of twists and bends in it. I’m learning a lot about how these guys run, and its like nothing I’ve ever played before. Thexus has so little personal offense, a slow overall army, and a ton of parasitic effects. His army also has some huge deficiencies, and figuring out how to overcome then and use them to your advantage seems to be the real key to this army. It’ll take a little while, I expect, but it should be well worth it. I cannot wait until their second caster!

We rolled up a scenario, and ended up with Rally point: Two Zones slightly offset and Objectives in the center of the board, 16″ up. Neither objective would do anything, as almost every model in both armies were fearless.

I win the roll to go first, and he chooses to stay on his side of the board. I Remember vividly the order of operations problems my troops had on turn one, and make a commitment not to mess up like that again.

I’ve made some small changes, but I feel they are for the better overall. I’ll talk about why after the report.

I set up first, with Mind Bender Drudges on my left, and Mind Slavers on my right. The Wrecker was central, with Warden on the right and Subduer on the left. Overlords were placed left as well, with a pistol wraith and machine wraith on each far flank. I finally placed the Agitators behind the lines left, right and center.

He deployed, and made me a little sad. Kreoss in a bee line for the wall, with a Reckoner and Fires to the left side and a Reckoner and a Repenter to the other. Vengers deployed far right. Choir was deployed to support both sets of jacks.

I put the TAC centrally to see what I could do with them.

He set his Errants across from my Mind benders.

Pregame thoughts:
Jesus Christ this was going to be hard. Holy Ward was going to be on the Vengers, and Kreoss once they died. The Flag was in the back of the Errants unit, and I was never going to kill it to get rid of spellward. All four jacks were going to be unable to be targeted by spells. The Errants crossbows are blessed, Ignoring Deceleration. Their swords are magic, causing me a ton of consternation with both my pistol wraiths and my machine wraiths.(note: I just looked this up and found out that the Errants have magical, blessed crossbows, but regular swords) The Vengers weapons were both magical and blessed, so I needed to keep the pistol and machine wraiths away from them as well. Oh joy. Well, no reason to pity myself. Lets get to it!

I ran very cognizant of trapping my models in. Benders ran over towards my zone, and the slavers to the center. I ran the wrecker and all the Monstrosities forward trying to jockey for position. Machine wraith and Pistol Wraiths, dangerous as it was, committed to flanking maneuvers, hoping to pull one or two away. so I could blunt the main charge. Thexus cast deceleration and declared himself a FOC 5 caster for the rest of the game.

Kreoss’ army moved up carefully, with the Errants taking pot shots on a pair of drudges. Reckoner assaulted a drudge who passed his tough check, and the other Reckoner did the same, but was out of range. Vengers ran to punish the zone, and the choir gave out warding to all the ‘Jacks. 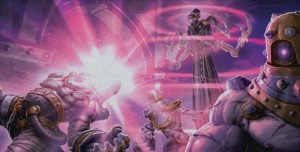 Turn 2
I freakin’ did it again. The way I’d placed the Dominator had gotten him trapped, and he had trapped Thexus in. The Mind Slaver drudges were pinned behind the Dominator as well, between him, the objective and Thexus. I was really upset with myself. I started with the Pistol Wraith, who moved in front of the Reckoner, and made with the Death Chill. Except I missed the first attack. sighs. I moved the Subduer into range of the forward Errant, shot, caught, and smashed his face in, leaving a perfect path for his Reckoner to my Subduer. I then moved my Machine Wraith about an inch behind and to the left of my Subduer. If he wanted to kill it, I was going to make him pay for it! I was able to finagle some sprays off onto the Errants, using a wrack as a targeting beacon. It didn’t do much, but I got rid of a few. That freed up my TAC to try and toss some Fireballs out. One targeted the same wrack, at which point I realized I’d need 10’s to kill Errants on the scatter, and decided on smoke grenades for the rest of the unit. I sent the pistol wraith into the smoke and tried to Death Chill the other Reckoner, getting a single hit, again. Sighs. I then moved the Machine wraith into the cloud as well. Mind slavers moved up to jam, Thexus cast decel, and we called it a turn.

Taking advantage of my going first, he went onto the offensive, but not taking my Machine Wraith bait. He sent the Ignited Errants into the Subduer, doing significant damage and killing my pistol Wraith. Fires moved into threatening range of the Subduer, with Warpath and Hallowed Vengeance ready to trigger. The Reckoners fired out at targets of opportunity, doing some damage. More spell Drudges were dropped, and the Vengers cleaned the zone out to score a point (we remembered later that we couldn’t do that and it very well could have changed the tide of battle). Kreoss camped back with the Heirophant and the Choir.

Turn 3
At this point, I’m starting to suffer heavy losses, but I can get a few plays in, I think. I need to pop my feat, but it doesn’t look particularly promising – Nothing is in range of my heavies even with the feat and TK. I will be able to clump up and mess with the positioning on the Errants and a pair of heavies, though, So I think its worth it. I allocate 3 to the Subduer, and keep the remaining 5. I go with the Mind Bender first, trying to get some good fist attacks and line up some Adrenal floods on Mind Slaver Drudges. As I took the Mind Bender attacks I completely forgot myself and pissed down my leg, doing nearly worthless spray attacks instead of the Adrenal Floods, which could have cost me a huge play and probably the game. I moved Thexus up and used my feat, freeing up the Subduer and maneuvering around a few other pieces, including Fires and the Reckoner. I used Deceleration and TK’d the Subduer forward. I moved the Agitator into position and started Instigating. My Subduer then moved forward, and was just in range of Fires of Salvation. I fired off a boosted shot with the net gun, and drug him in. I bought two more attacks, and the damn thing was still kicking. This was when I remembered my original plan of Adrenal flood and kicked myself. I was only able to charge in with two, but I was able to get more on the second Reckoner and the Repenter. Thankfully, my charging 15’s were able to take down fires, because if that had failed I would have been in a a heap of trouble. Sadly, I had also killed the one model I had moved into 10″ of Thexus before I decided to try and charge a Venger with the Wreker, meaning I had to walk up and hope I was in range. I was not. Thankfully, the TAC was, legitimately, on fire. Two charged a pair of Vengers, who went down to singularly powerful mace blows, though I wasn’t really able to exploit Battle Wizard, as the Vengers were still under the effects of Holy Ward. Finally, because of the feat on the right hand Reckoner, I was able to get in there with a Machine Wraith. I was pretty pleased with the little guys so far. 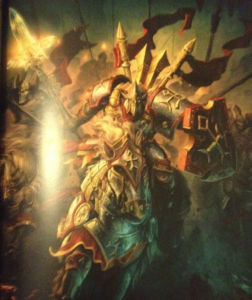 The reprisal was stalwart, with dead bodies of drudges and monstrosities filling the field. I lost almost every one of my remaining spell drudges, and his Left Reckoner charged my Subduer, thoroughly pasting it. Kreoss kicked the Machine Wraith out of the Recoker, who then was stabbed by Kreoss for his efforts. Kreoss then cast crevasse on the Mind Slaver leader, hitting and killing him, spraying 2 overlords and a drudge.He managed to kill both overlords and the drudge toughed it out. The Reckoner walked up and crushed a drudge, while the Vengers charged the TAC and tore one asunder while another toughed, with another moving into and doing some damage to the wrecker. The Repenter managed to extract itself and burn down another set of drudges, leaving me with only monstrosities, Thexus, and a whole variety of Cephalyx.

Turn 4
We only managed to get through my portion of the turn before we had to call the game due to time. I was able to get my Wrecker to finally get on a rampage and clear a zone, scoring me a point and breaking bits off of the Reckoner and the Repenter. The Warden had managed to fight his way into combat with the Reckoner, though he did substantially less damage than I’d hoped, even with Instigation up. We called it a draw due to time after that turn.

I really enjoyed the game, but damn me if I’ll ever drop Cephalyx against that list in a two list format. One of the things I keep running into with the Mind Benders is the limitation of the Mind Bender himself. Though I’d just love to use the detonation effect, I’ve only got a 5″ move and another 1.5″ after that to effect. There were some times I could have used that to better effect, but most times, Its just not working out.

The list selection changed as well: I dropped Croe and his friends. RAT 5 was just to much for me to overcome. While the feat, TK and Rampager are all fantastic spells, when I am playing Croe I feel this need to overextend and try and get those magical situations to work. Instead, with the TAC and the two Pistol Wraiths, I felt I got a ton of use out of them, even in a game where most of the models were immune to spells. The swap of the Bloat Thrall for the Machine Wraiths was really good here too. I was able to stave off a piece trade, in my favor. Overextending a jack into my lines  near a Machine Wraith when I have TK, my feat and a Subduers gun around to pull it easily out of your control area can be a huge deterrent.

The real takeaway, though, was that I need to be more aggressive with my Agitators. There were a couple times where my engagements were dictated by where I could position my Agitators, instead of where I could do the most damage to my enemy. Running one up front and next to each Monstrosity, or even in front of it, seems like a good play. Leaving one behind to fill the inevitable death also seems like a good choice.

Can’t wait to get another game in and keep learning. I’m not the brightest tool in the shed, and I take some sharpening!