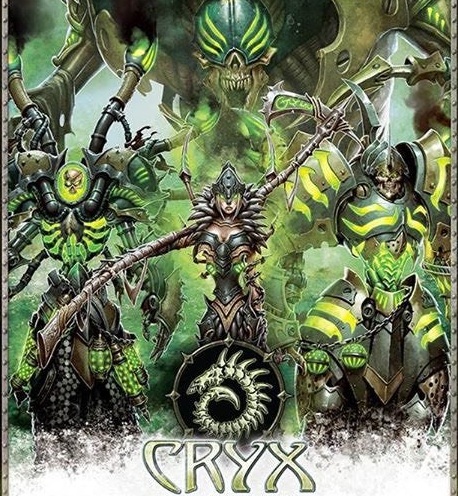 When I signed up for this, I never expected Agathia to bubble to the top right away. After the first poll, though, I knew she wouldn’t be far behind, because the internet is a ruthless master. I expected Aiakos 2 to win out first, but that wasn’t the case. Lets take a look at her, and see where I started out.

First though, as always, the poll results. 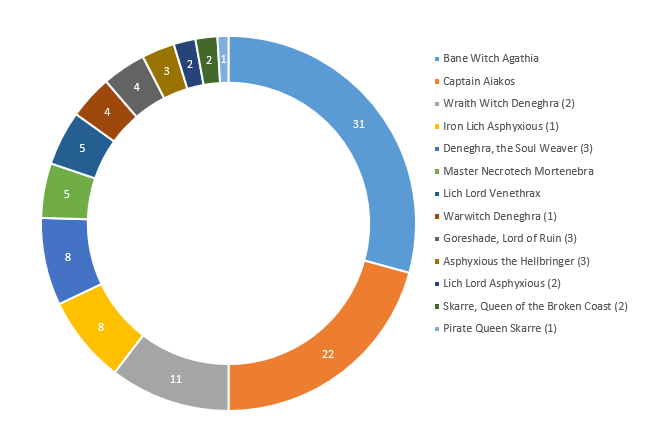 Honestly, I didn’t expect Mortenebra 2 to win previously, but she was so new and fresh in everyone’s mind, that I really should have seen that coming. Following that up with something I was looking forward too, that was a surprise.

Agathia has been a bit of a problem for me since her release with the new edition. I wanted to play her, but I didn’t want to buy the extra jacks and other random stuff she came with in order to field her. Compounding on that was the news once she released, that her amazing sculpt by the ineffable Doug Hamilton had come out less clean that desired. Her artwork and her 3d render is amazing, and to hear that it was less than represented made me a bit sad. I settled in to wait for a metal version so I could own her.

Much to my surprise that conceit ended when the poll came out showing that I should play her after Mortenebra 2. It was fantastic news, because I’d really wanted to try her out but it was also irritating because I’d not owned her yet. Thankfully, I had a buddy with a who’s the boss kit who let me borrow her (Thanks, Fox!). I was really down on her for a long time, but wanted to see if I could pan a little gold from her.

First, like last time, Bane Witch Agathia is actually another venture into disappointing  expectation setting. As a Bane Witch, I expected her to synergize with Banes, have something to do with Banes, or even be like a Bane. Instead, she is none of those. Amazingly and inversely, she has anti-synergy with banes! Ghost Walk is redundant, a third of her feat is wasted, and parasite isn’t something they need help with. She even brings Dark Shroud on her person, meaning that if you really need it, she can apply the -4 or better Arm Swing against almost anything. Its really frustrating.

With all of that out there, though, she does do an interesting bane-ish thing. Instead of making banes better, she makes the rest of the army into old school Banes, what with a turn of Stealth, Parasite to swing damage (its essentially weaponmaster) and Ghost walk to make terrain not matter. Its a great concept, but the name sets a different standard of expectations. It sucks.

As always, lets start with the caster.

Her stat line is surprisingly favorable, even compared with some of the other good casters. 16/15 and 15/16 are very solid, and though she is a touch lower at 15/15, its still respectable. What is really great is that her SPD, MAT, FOCUS and P+S are all moderately respectable. Speed 6 is good – average, though its no 7 like the Dennys and Skarres. MAT 7 is good, though not the 8’s of the combat Lich Lords, and her P+S is 12, but its really 14 with Dark Shroud. Focus 7 is exactly where she wants to be. Anything less, and she’d need to hike up her boots more in the abilities department, and anything more and she’d have to take a chop or two at her abilities and stats, not something I like.

The back of her first card really simply makes her a “Bane Witch” giving her Dark Shroud, like the banes, and Cull Soul, like the witches. Dark Shroud is amazing, and its applications are not to be underestimated. Its a solid trick to have in her kit, though not one she will use often. Cull Soul will rarely be used, but when it is, it can rocker her up a focus or two, really allowing her to sing.

Meat and Potatoes time, guys. Spells and feat. Here is where we get in some really good stuff.

Starting with her spell list. Hellfire is a great single target nuke. Though its often not worth casting because you will likely be killed in response and wish you had either the 3 or 4 focus it cost to toss it out. Parasite is the premier armor debuff, granting her both a touch of armor and a healthy -3 to the target armor. Ghost Walk is a go-to spell for outs in a lot of situations, and has the capacity to deliver models well out of line with the standard expectations of the models. Immunity to terrain and free strikes is a strong ability. Hellwrought is one of her two unique spells, currently. It gives a warjack in her battlegroup +2 arm and we’ll call it warjack-vengeance. Being able to advance and make an attack with a warjack is win-win, clearing lanes and getting better threat vectors fairly often. Finally, Vanish this is a rarely-used spell to put her 3″ further up the line or get some strange angle off. I don’t expect I’ll cast it much, even with its Cost of only 1.

This spell list is only missing one thing: Hit Buff. If it had that, I could call this an excellent list. Each of the spells provides a specific function that, while they won’t always be required, are useful when they come up, and can often break the game open.

This feat is pretty solid. Turning every model in your list into MKII Bane Thralls for a turn is a good move. Its got three distinct parts, so lets break it apart a but.

Models/Units currently in her control area gain Ghost Walk – This is the best part of the feat. Ghost walk on everything in your army, due to the Model/Unit clause, and the ability to catch a model and then walk away and be somewhere else for the end of activation is really solid.

Models in her control area gain Stealth – this is very, very good. I’ve come to value stealth less as a protection agent for any single model, and more of a protection for hordes of models. Many high value guns with single good shots can see through stealth, but many small arms cannot. This leaves us with the ability to flood the field with Stealthed models, creating an area that is saturated with targets that require dedicated anti-stealth guns to remove. Its a good ability.

Warjack models in her battle group can be placed completely within 3″ after their activation – this isn’t particularly impressive, and I look forward to seeing how it works. I assume it doesn’t, but that’s without playing her.

Here is where we start to look at a few things that we will be weighing to see if we should put them into the list.

Jacks –
Going to need some arc nodes. Parasite ain’t gonna apply itself, and ghost walk is only RNG 6. These make it hard to really start working without them. Additionally, on the Feat turn, I think I’d like to be able to have a gun, so that I can move up, shoot a thing, and then get out of dodge. I don’t know if its worth it, though, as I will likely be positioning for another spell. I think I want Nightwretches, honestly.

Hellwrought is a great spell, but I want to put it on something that isn’t just going to giggle at the +2 armor, and will get work done. All the Crab Jacks are solid. I could give them a swing, but what I really want to do, is put it on Erebus. a 14/20 model with Poltergeist is a pretty solid stat line. Add in that he has auto-freeze claws, access to Parasite and ghost walk, and Hellwroughts Vengeance ability, means that if he takes damage and doesn’t die outright, he can walk up and freeze something solid before he even goes.

After that, I don’t think I really want any more jacks. She can’t fuel a lot and give them all Ghost Walk without her feat. Parasite and one Ghost walk eats up her stack pretty fast.

You know what likes army wide Ghost Walk and Stealth? Pirate Crew, that’s what. But, I don’t have all my pirates assembled and ready to go. I really want to try Ghost Fleet with her, but I just don’t have it ready. Maybe soon!

What else likes Ghost Walk and Stealth? Well, everything of course. Banes don’t really need it, nor do Blood Witches, so we can leave them at home. Carrion Thralls, I was told, could be very good. Given that Flight lets you ignore models and terrain, Ghost Walk lets you ignore free strikes, and you can simply be everywhere you want to be. 10″ charge + 5″ reposition seems really good, when you ignore everything on the board. Satyxis Raiders are also a significant contender. They are very fast, and often like to hide in trees and rubble to maximize their Whipping Winds ability. Being able to either get into a defensive position with stealth under feat, or allowing them to charge into the enemy without giving up either Whipping Winds or Red Tide is very strong.

Without a to-hit buff, I think that a lot of the army is out of the running, but Soul Hunters seem to fit a really good bill. with Ghost Walk, Sealth and Parasite, they can hit from very far away, deep into the enemy army, and will almost always get there. As discussed, though,  Stealth does little to protect high value targets, and I don’t think the cav would survive. Nothing else, unit wise, sticks out offensively.

Defensively, I really think she’s vulnerable to guns, so a simple bodyguard of Mechanithralls could really do her well. Grab a trio of Brute Thralls and have them sit around her all game preventing those random 1-2 shot caster kills. I think its got some merit, as outside of feat turn, she just hangs out there in the wind.

Solos, though, those are another thing. Two stick out right away. The Scarlock Thrall is a great attachment for her. While the Withershadow could do good, as it does with everyone, I think that getting the 2 focus out of a free ghost walk is worth it. She does have Parasite, which you really need to hit, but your already investing so much focus, your likely to boost even with, or in spite of, a reroll. The Soul Trapper also sticks out as a model you could just pop in there. Whats great about Agathia is that no matter how many focus she has, she can burn through it. Ghost Walk is a great spell that simply allows your army so much flexibility. Getting extra souls from the Trapper and getting her up to 9 or 10 focus for a turn or two could be back breaking. Learning from Denny 3 and Terminus, positioning them is critical.

This is a simple, fast list designed to shred infantry, scare out warjacks and jam fast and strong. I wasn’t really able to get the Nightwretchs in there like I wanted too, but this seemed fair enough. I’ll get a few games in with it, and report back!