I love DMing. Its a problem I have and I don’t really know how to fix it. Often times I have been playing in a game and thought it would be better off for everone if a character was allowed to do something that had been stifled, either due to the dictates of the game, the personality of the DM, or the temperment of the characters. Part of this is that I have a bit to much control freak in me, but part of it stems from seeing, in my mind, how much cooler things can be when the players dictate the game to the DM.

A few weeks back I’d mentioned that I made up most of my DMing during each session, relying on background and past events to guide my hand in order to make the game seem realistic and cohesive. While that covered most things related to the DM side, there is an extremely important segment of the population it leaves out:The players.

What makes D&D different from many other games is the interactivity between the story and the players. This, generally, is portrayed by how the characters make their way through an adventure or campaign. I equate it, roughly, to a Maze. 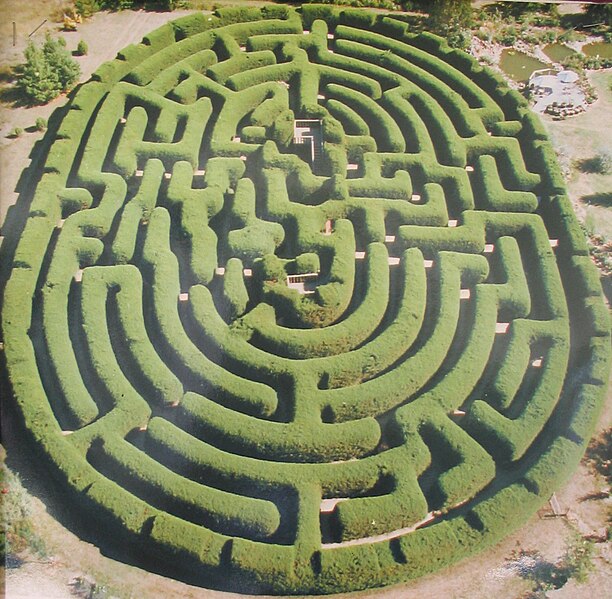 The maze is structured so there is one way through to the other side, and can be safely navigated if you follow it. Other paths are possible, but generally inadvisable. Dm’s create adventures like they do mazes, giving them the illusion of choice, but limiting them to the options that the DM has chosen. This is a limiting factor on the adventure, though one that is not unreasonable. Many DM’s and players don’t have time or patience to plan for every possibility, and therefore limit them.

Winging it and improvising eliminates some of the barriers that are erected in the game. More avenues become available, but its still a selection limited by the  DM’s mind and how creative they are. For some, this will be all the growth they need. Their imaginations are wild and varied and the methods they come up with for stories are interesting and challenging. Their mazes are both complicated and have many exits, leading to a challenging and unpredictable structure.

For others, though, including myself, there is yet another stage of DMing, and another type of game entirely. This is the type of game where the players and the DM, jointly, create the story that is being formed. I like to refer to this as the connect the dots method.

What really makes this interesting to me is how the level of interactivity is ratcheted up, and become the focal point of the game. The DM has some plot points – concepts that he had to get to the players in order for them to have the information to make decisions, and he has some vague features lined out – an eye or a tooth, say. Here, though, the players aren’t hemmed in by the pre-suppositions that the DM has. Instead, they are given completely free reign to put the dots together as they wish. If the Duke of Bulgrad needs to be captured in order for the players to make a decision, then he’d going to be captured with the players around. When the players go south, he also went south, to visit the Kingdom of Katharan, ruled by Gemadran, Arch-Lich, giving him a very different take than if the players had gone west, and the Duke also goes west, to Cement a marriage alliance between his daughter and the lecherous King of Emarau. That is good, your working with the players to make a good story, but its still you’re story, and they get to live in it. However, what if, while in the Duchy, one of the players attempts to whisk the Princess Bauana off her feet. You’ve decided that the Duke is going to be kidnapped by the Blue Sliver Society while on the road to another town, but you can easily shift the target. The Blue Slivers, then, have their motives changed: They become agents looking to separate and capture the Princess from her new and erstwhile companion.

How this plays out is ultimately up to the players, actions, but you’ve also let the player solidify one of the aspects of your world: The kidnappers were out for something sinister, and they were willing to capture a young woman to do it. What really matters, though, is the willingness to scrap everything you’ve concocted up until now to make the players are actors of agency, not you. By using their suggestions and comments during the game to guide how your world shapes up, it creates a fantastic synergy between the group and the DM. They suggest things that you’d have never thought up, and they get to see their words and thoughts rewarded in a way that is impossible, practically, unless you’ve become extremely predictable as a DM.

Interestingly enough, this partnership also lets you add details you didn’t know were missing from your story. You have a monastery of the god of the dead on a cliff, and the players are looking for an artifact of the gods in the ruins of the monastery. One of the players says to the others, as they approach, that it would be wise to search the catacombs. If anything revered by the god of the dead exists, it is likely to be there. Stunned, you look to the map of the monastary and quickly scribble an entrance to the catacombs and the hiding place of the Bell, removing it from the tower it was locked and, inverting it, and creating a dungeon. It makes only perfect sense! Why would the god of the Dead hide a precious artifact in the sky. It makes no sense.

The coolest thing about all of it, though, is never having to think to yourself “I’d never have thought of that” because you don’t have to. You have a team of players assisting your thinking patterns!

Monday Mythology – The Daughters of War