I’m writing this before even heading out to lock and load, but I am scheduling this to show up on Thursday, at noon, right about the time I’ll be getting breakfast with a friend from Muse on Minis on the other coast, gearing up for a day of PG gaming. I’ll also be looking to get a first bite at a Cephalyx army. I’ve been chomping at the bit to get these guys and put them on the table as often as possible between then and August as I can. I’ll probably even be playing them at NOVA, so if your coming down, find me and see if we can get a game in!

The list I’ve put together to put together is a simple tasters choice affair, in order to let me get a feel for all the models in the range 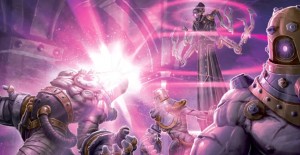 I’m considering cutting the Croes down to 7 and adding a Pistol Wraith, or even cutting them down to the Tactical Arcansit Corps, and adding two of em. Either way, I feel I’ve done right by the army.

I’m worried that the amount of Officers, the vulnerability of them, and the reliance the army has on them will end up making it completely worthless, but Deceleration makes them just hardy enough I’m not clenching my buttcheeks in terror, just worry. I really wish I had more to go off of, though, but having no play time fills me with trepidation about making any sort of predictions.

I’m also negotiating a trade with a friend of mine, so I’ll be able to repaint my Cephalyx models in a deep red color, one I think goes with my Cryx army, but apart from it.

I know its short as hell, but its a Convention update, and I expect to be tweeting and facebooking updates starting at 11:00 PST, so stay tuned anyway!! I’ll also be doing a wrap up on Tuesday, writing it on my flight on my tablet, so we will see how that goes!