Back when I began painting 10 years or more ago, I knew very little about color and shade. Instead, I made up for my skill with shear determination. I learned a number of things along the way, but I’d never really mastered the correct shading of colors, and highlighting eluded me as well. I the last year, I’ve learned a lot about shading and highlighting, and its really made a difference in my painting. I figured I’d share most of what I’d learned!

Part of the things I’d wished I’d known when I began painting was a touch of color theory. I’ wanted just enough to be dangerous with a paintbrush and to make good, solid color choices on models. I threw my hands up in both fear and terror anytime someone tried to teach me, though, because it seemed that it was some sort of esoteric wizardry. Now, having overcome that ridiculous fear, I can break miniature painting that I do into three major tips.

1- Mix your paints
2- Shade to Brown, not black.
3- Each color leans towards two other colors.

Sadly, I have neither the Photoshop or photographic skills needed for this task, so you’ll have to deal with pictures and small guidance.

One of the first steps for me towards painting better was using mixed paints. It allowed me a relatively easy transition to a number of more difficult painting concepts, including two brush blending and washing, and its much easier than I thought it would be.

This is going to be a theme, by the way: each of the three here seem hard and they sound hard and and they read hard;  but aren’t, actually, hard.  Most times I was able to get the concept within minutes of putting brush to model.

Mixing paints allows you a smooth transition of colors, even if its not blended in any way, as it creates a gradient that pre-mixed paints just don’t provide, both in highlighting and shading a color or colors. Mixing is vital to create colors that are the foundation of the other two tips, which allow a greater flexibility while creating our models colors.

The first of those two techniques is shading towards brown. When you shade towards a dark, colorful brown, you’ll really make a model much more lively. There are very few truly black things in this world, and the use of black as a final shade will give your model a very different effect than when you shade towards brown. Most of the time, shading towards brown involves very little shading with the prebottled browns that companies provide.  Instead, it involves making a brown from the color you start with.

For example, purple. Its a hard color to shade no matter what your doing, and black simple gets the color darker. This may not be, in all cases, what you are going for. If you instead use a yellow, you will move the purple towards brown naturally, creating a pleasant gradient. Why yellow? Because good browns have all the primary colors represented, just to different degrees. Purple, made up of red and blue, lacks only yellow to turn it to a brown. adding increasing amounts of yellow will take that purple color towards a deeper and deeper brown, eventually hitting a nice, solid shade tone. For this shade, I would avoid a yellow that is too green or too orange, as that will add either more blue (for green) or more red (for orange) that will ultimately unbalance the brown.

See what I mean about reading hard? I am even trying to be simple! Really, don’t be afraid. Try it a few times.  How do you know what color to use, though, when your at your desk painting? Simple! The color wheel! 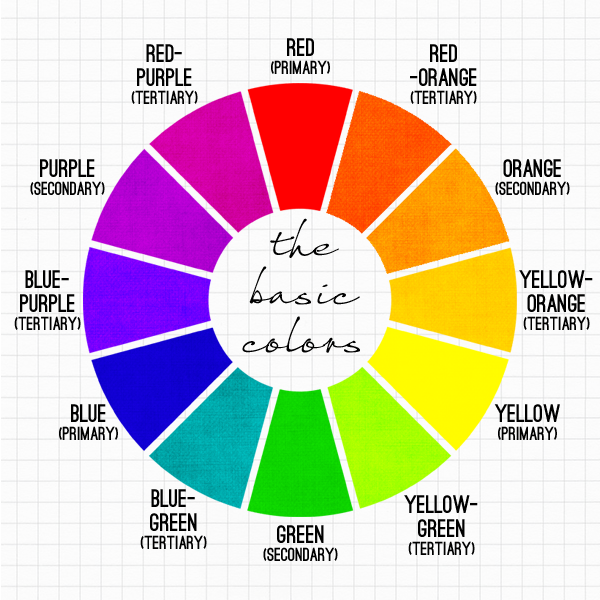 The color you want to use will always lie directly across from the color your using!

We are going to use a similar principal when we create highlights. This, though, involves seeing the color for its two part components. First, take a paint pot, any paint pot, and stare at it. You should be able to figure out what the main color is, and what its secondary color is. Most pots are not simply a single pure color, though there are some exceptions when it comes to blue and yellow. Red is especially hard to find in a simply red form, and will lean (bias) towards blueish or orangish.

What is this blueish red, you scream at the computer! And rightfully so! (I just imagined this in Patrick Stewarts voice, BTW). Its a red that, if were to naturally extrapolate its color, would end up purple. Its what some would call red-violet. The orangeish red follows a same though process, though it would end in an orange color. Try it a few times, and it’ll start to click.

Let me point out some neat colors
Greatcoat Grey is blue-based
Coal Black is green based
Sanguine Base is a blue-red
I’d do some of the GW paints, but I just don’t own enough.

Now that you’ve identified the two colors, you can start  a highlight based on those two colors.

Purple is one of the main colors of my Cryx army, and has been since the very beginning. In the beginning, it was extremely hard to paint, especially as I had chosen dark purple. You don’t want to get into the pastel section of the palette, but you need some way to highlight the lines and make them pop. Here is where the two color method worked its magic. 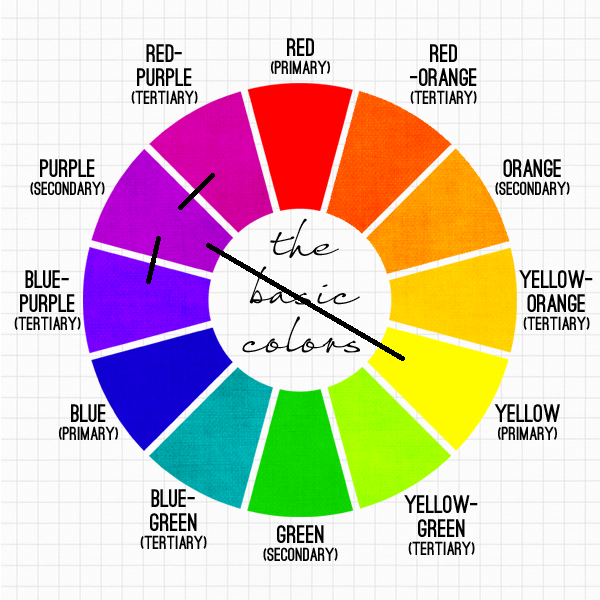 Purple is the combination of red and blue, and the compliment (opposite) of yellow.  I realized I needed to figure out which direction the purple I wanted to get to was biased. It turns out, it was extremely blue! From there, it was simply choosing a bright blue with which to mix the purple to get a gradient of purples that didn’t move towards pastel. 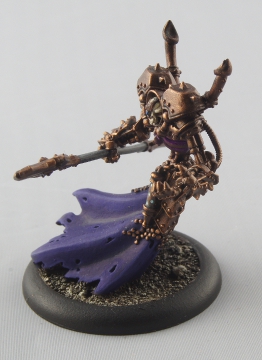 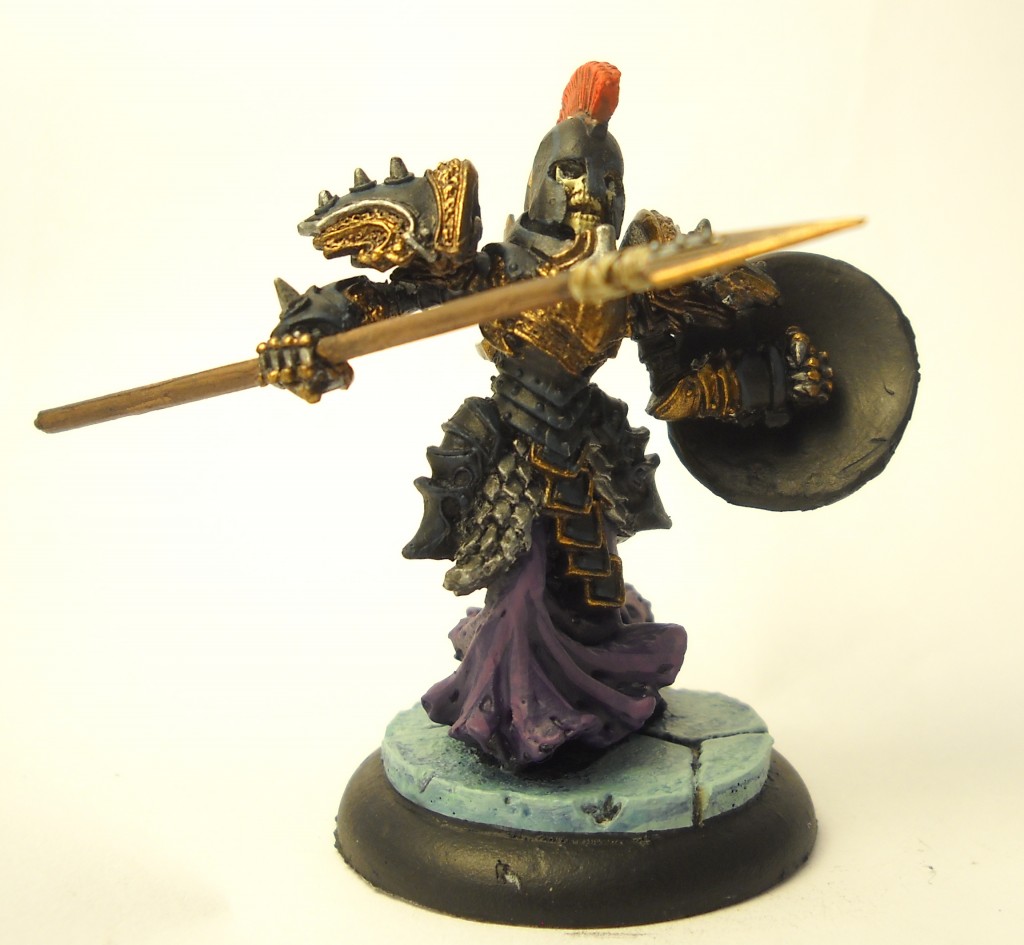 Instead, I mixed a color that was just a brighter version of what I was already using, and ended with a pale blue-violet highlight. It looks strange on the paint palette, but it worked extremely well on both Asphyxious and my Bane Spartans, though in different ways

One thing to remember here is that a color can never get brighter than it is when it comes out of the pot. it will always become more pale with the addition of another color. Make sure the brightest part of your model is one that is straight out of the pot!

Now, to go use this to paint Aiakos, first of the Tactics rewards to get painted!

We're with you, to the Death!