All the things that PP released from Templecon this weekend have me immensely excited to be playing their games, all of them. Even Level 7: Invasion has me really stoked to pick up a copy and defend the world.

There have been spoilers coming in from a thousand different directions, and I’m going to try and consolidate as many of them here as I can. If I’ve missed something, let me know.

Vengeance:
The very first thing that came out, Wednesday, was the Warmachine: Tactics Backer update. In it we got two Images: 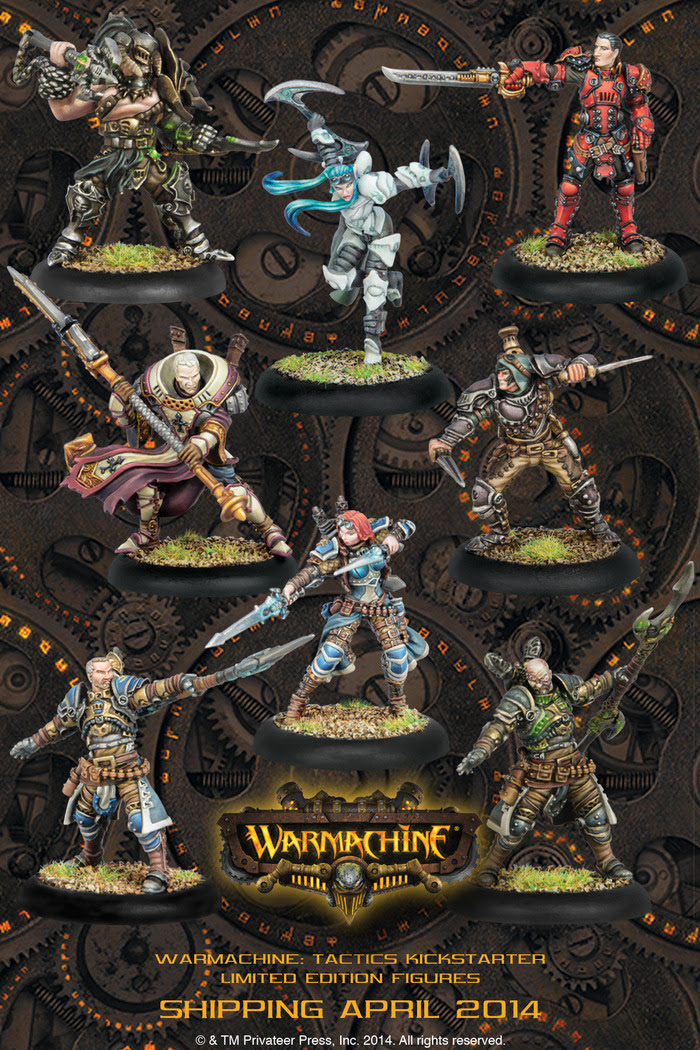 The first, above, is the painted sculpts of all the novice Warcasters, coming in Vengeance, along with Sturgis in both his epic and original incarnations. Sturgis is a separate release, but you know, I’ll accept that.

The second, below, is the cover of the short story compilation of all the novice Warcasters. If you look close enough, though, you’ll notice that the Khadoran ‘jack is wandering about in a distinctly different weapon load out. This lead to Kiko commenting on it and Matt Wilson replying with:

Indicating he knew about it, which is fantastic. Later on, Sunday evening, rumours started to surface that the gun on the hidden are of that monstrosity was a beast: ROF 5 and Double strike. Crazy, I say, but most things I’ve seen that are crazy come to light from a grain of truth. 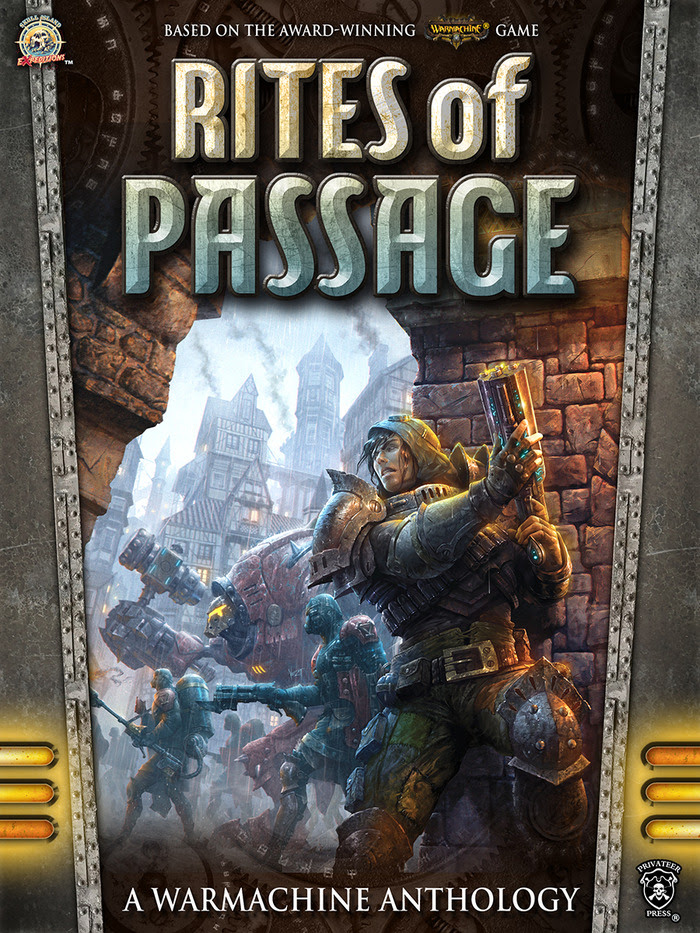 Thursday morning, the store opened, and there were a number of early releases available, as their always is at these events. Among them was Rollin’ Bones Goreshade – a con exclusive sculpt of a soon to be released alt sculpt. Plarzoid got some unboxing pictures, and he looks really cool. He is not my style, but I can definitely see where he could appeal to a lot of people. s. Its a fantastic sculpt, and I look forward to the standard one.

About 10am. Chain attack got the scoop on Stryker 3, and man is this guys good! 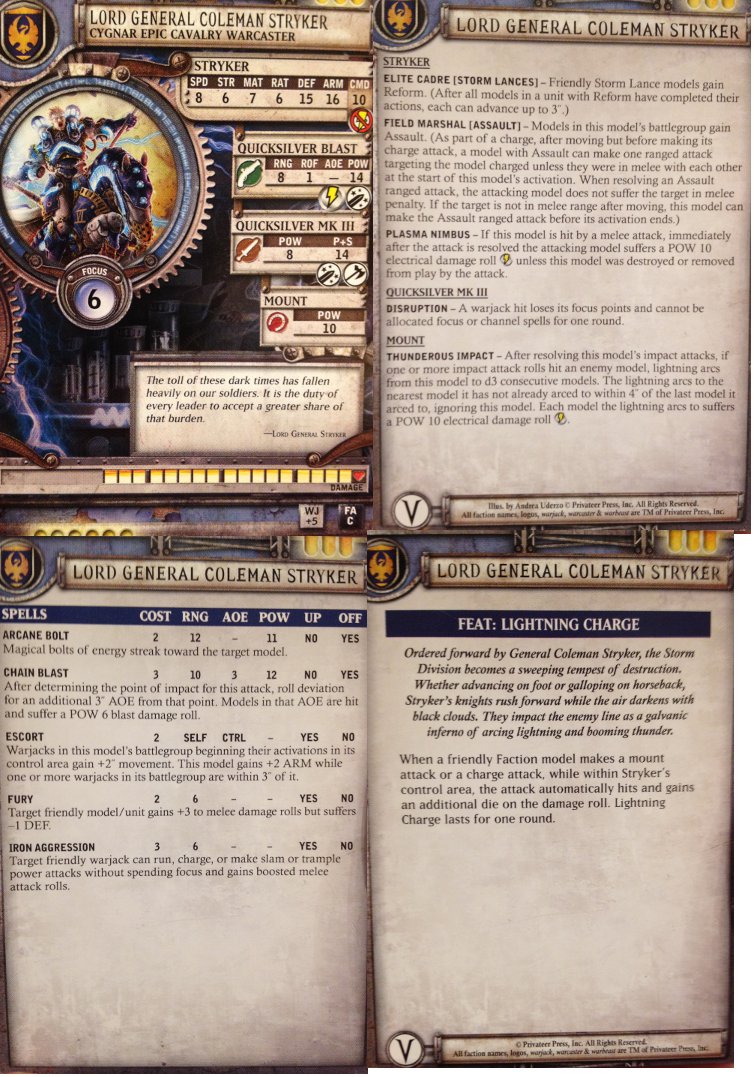 I spoke with Lyle, who’d been running his Theme list all weekend:
[table id=7 /]
As you can see, the Theme List does at least two things.
-Point Cost reduction on Storm Lances
-FA Increase on Storm Lances

Lyle also mentioned that there were two other benefits: Armywide Pathfinder on turn 1, and +2 speed for ‘Jacks on turn 1. None of that is wasted space. The speed combined with Escort will rocket the battlegroup across the table. Pathfinder will make sure the army gets in position regardless of deployment, and cost reduction is two free points in the army, enough to grab a Stormblade Captain, say. I do not look forward to the beatings I expect to receive the first few times I fight him.

The next peak was late Thursday night, when Will Schick had his Goresshade III photograhped and put into the Cryx forums. I am really looking forward to grabbing him and putting him on the table. 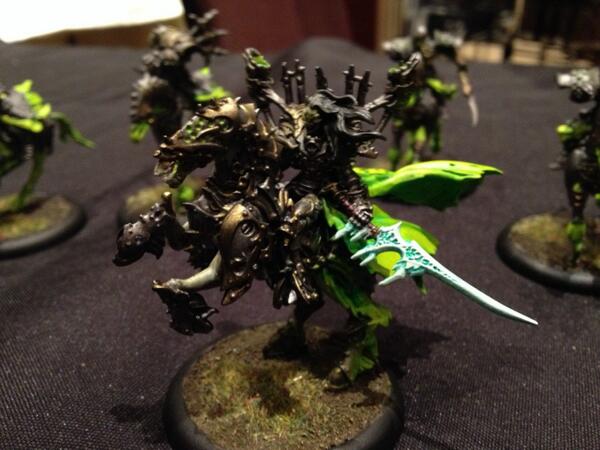 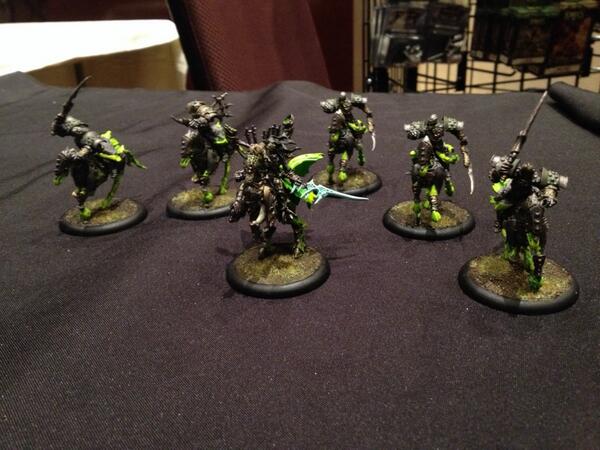 The final drop on Thursday was Will, again, sending a simple tweet out.

Turns out everyones favorite executioner got a bump in focus. With the known spoilers so far giving him a debuff feat that also makes enemies explode into fiery bonfires, and the Wracks immunity to non-magical shooting, the extra focus is going to be a stellar addition. with that 14″ control area and the Huge 4.75″ base, he can really reach a large portion of the battlefield with any control area effects he has, including his feat!

and this was all before the keynote Presentation Friday morning!

The keynote was all sorts of insane, too. While I was disappointed at the keynote of L&L last year, nothing of the sort can be said of this years Templecon. Dear God, did they set the stage. If you haven’t seen it, you can watch all five parts here

Lets dive in one piece at a time!

First came the Warmachine Tactics preview, where they showed all sorts of Sexy model preview and level designs. While I appreciate the preview, I’m still stoked from Kickstarter. I didn’t need anything to raise my level of excitement. It was really cool to see the Protectorate ‘jacks, along with Sorcha and Strakov. I Hadn’t know that they were going to have Strakov, though, and that’s cool to know.

The next Portion moved into something near and dear to my heart: IKRPG! They seem to have done the same thing with the IK as they did with Warmachine and Hordes. Its two separate, compatible games. IKRPG: Unleashed gives us a whole pile of new player character races: Tharn, Gatormen, Bog Trogs, and Pygs. You can also take Human, Trollkin and Nyss, though they are available in the IKRPG:FMF. They have Bonegrinder, Monster Hunter, Tharn Ravager and Bokur as classes for the taking. They also specifically call out each race as having vastly different Warlocks, which will create some really cool characters. Oh, and over a hundred pages of monsters! A hundred! That is just overwhelming. I can’t wait to get back to playing the IKRPG! Screenshots: 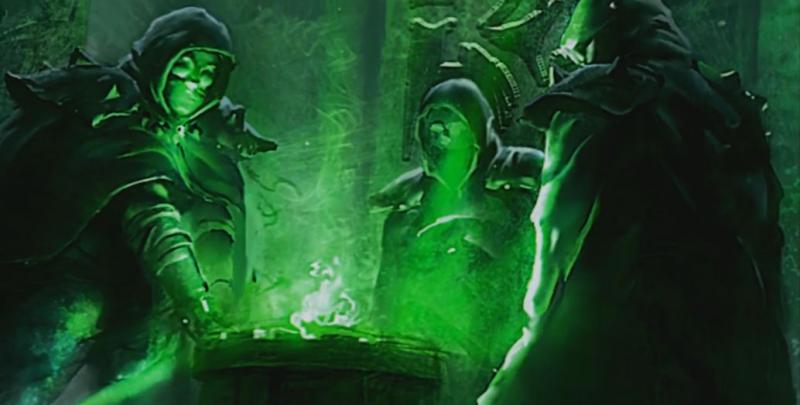 Now, now we get to the meat of the matter, the huge pulsating heart of the keynote.
Hordes: Exigence
Now, here is where we get all sorts of screenshots and Details. I’ll just link the pictures to a gallery. If you want to see what something looks like, click the link!

Hordes Exigence:
Female Gator (Juga Juga) and Farrow Casters (Helga the Conqueror)
The female gator has an undead snake, and behind her is an undead Tatzelwurm
Xerxes 2, mounted on a Rhino, on what looks to be a Huge Base. He’s also mentioned as having the most badass wheelchair, so its plausible his legs are broken.
Legion gets Epic Absylonia, who is said to have Conferred Rage, stolen from Butcher 2
Gator and Farrow Battle Engines: The gator one is a mobile sacrificial alter, and the Farrow one is a meatgriner/flamethrower.
New Character Warbeasts, including a Heavy Nephalim for Saryn/Rheays That has two different affinities
Satyr Warbeast that looks blind. Has a spear/staff for circle. Mentioned at the same time as more character warbeasts, but who knows.
Lesser warlocks for each faction with no set battlegroup but affinities for certain beasts
– Troll: Pyre/slag
–Circle -Falconer w/ Griffons
-Legion Lesser warlock mentioned, but no picture.
Three of the four (five?) factions will get Warbast “packs” of four smaller warbeasts. Is a combination of both unit (separate damage tracks like a Medium based unit, no spiral) and a warbeast (all the fury rules apply)
The Skorne look like little monster diggers
The Legion ones look like giant wasps
Rules:
[singlepic id=334 w= h= float=none]
[singlepic id=335 w= h= float=none]
There was also a brief moment that a trollkin unit with pistols showed up

Then, there is a short stint about a Risk-like game for Level 7: Invasion. I’ve very much enjoyed [escape] so I’m pretty sure I’ll pick this one up.
[singlepic id=356 w= h= float=none]

And, they saved the best for last, IMO. The new Mercs that are coming out at Lock and Load 2014: Cephalyx! Its been 6 years in the making, but it looks glorious!

Cephalyx will be a merc contract like Talion
– They will have living monstrosities, That are Living giant “not warjacks” with low arm but 36 boxes. – No cortex, do not count as warjacks, and are super cheap: No more than 7 points. 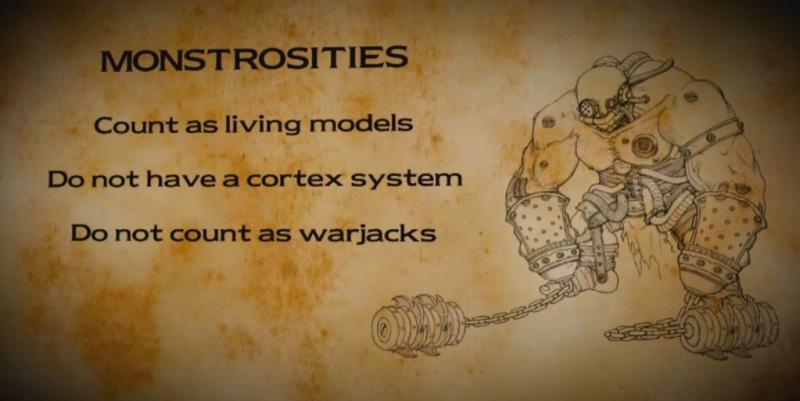 The solo is supposed to act like Choir, giving Cephalyx models +2 to hit and damage, a welcome addition to the monstrosities stats: 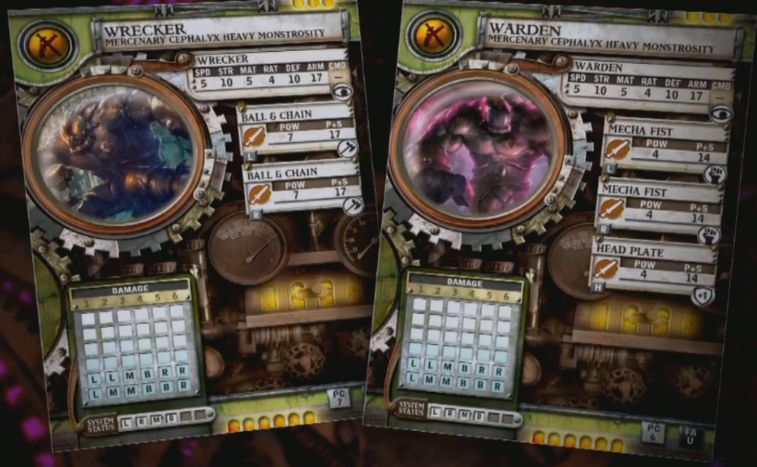 The Unit is a Cephalyx and some special drudges that it can use as arc nodes, hopefully for some good effects. Thankfully, most of the Cephalyx have some sort of sacrificial pawn ability, enabling them to stay alive longer than would normally be the case. Except for Blast: that’ll kill ’em every time.

The final Spoilers I’ve managed to collect are on the Cygnar Reliants Gun. Supposedly, it shoots thunderstorms: AOE clouds that do lightning damage.

All in all, I am very pleased. Definitely picking up Cephalyx at L&L in June. Epic Xerxis looks awesome, as does the Skorne Beast pack. I am kinda upset I didn’t get to see the Skorne Lesser Warlock, but I can wait what with all the other Insane crap coming out!
Oh lord! I am going to have to get someone to paint my Sacrificial Alter for the Gator Exchange…

Sunday: Play all the Games!

What the Future Brings

A Sudden Onset of Card Games