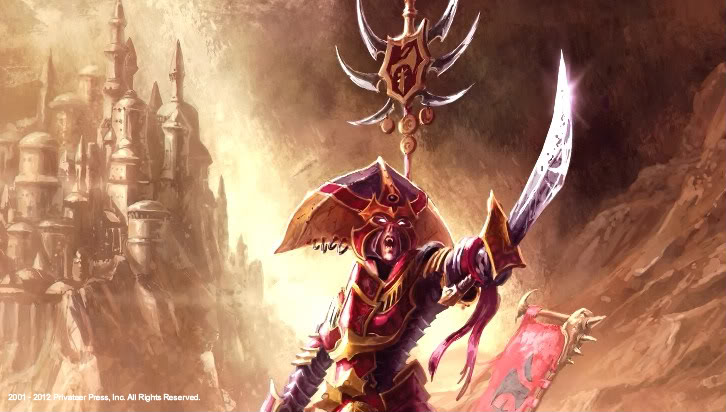 There are events and goals that come to pass, sometimes, that feel as if they come to their end swiftly. Looking back, you can remember almost nothing, yet time has inexorably moved forward, and what you had once looked forward to is now something that you can only remember fondly.Sometimes. Other times, They pull themselves forward with only their fingernails, tracing harsh, deep scars in the earth where they begrudgingly gave ground to inevitable. Most often, though, time passes as it should, breaking when and where it is expected, remembered often but not vividly. This, thankfully, is how my year of Skorne has progressed, and it not with begrudgingly or to swiftly that the I change factions. Instead, it is with the appropriateness suggested by the diversion that 12 months have now passed and I once more raise the flag of the Dragonfather and bring Cryx to the tabletop once more. That does not mean, however, that I’m done with Skorne completely.

I have yet to truly talk about the opinions and ranks of the casters I’ve used, and similarly about units, solos and beasts. I’ve been pleasantly surprised by some entries, and completely underwhelmed by others. I’ve got a few more Chronicles in me – I may make it to 40. I’ve plans to do the following articles, Starting with Hexy 2 today.

Hopefully I can get to that. Who knows!

Hexeris has been an amusing journey for me, predominantly because I never thought I’d pick him up again. A friend of mine and I had agreed that we didn’t see what anyone saw in him, and that he was pretty much bottom of the barrel. I’d tried him for a few games when he came out back in pre-historic times with Domination. I’d played him in 10 games early ’13, and gave up on him, going 5-5 and not feeling very confident with him. He Felt neither powerful, nor fun, and really lacked something really special to give him the boost over what I’d always played.

That was, looking back on it, the exact problem. One of the main things I felt he lacked was the ability to punch through armor if something big and heavy came in and, under no questions, needed to die.

I don’t know what type of bizarre thoughts decided to take residence in my head, because that sounds like the stupidest complaint one can make about Skorne. In a faction that contains Bronzebacks, Gladiators and, in the very same book, Tiberions, I had no reason to complain.

Down he went, into the bottom of the bag, to watch the foam as his friends above strode across the tabletop in glory. Then, This happened

I was compelled to follow the rabbit hole. Trevor isn’t known as a slouch who plays skorne every once in a while. I figured I’d give an article he sent me to a shot. Not only was it an excellent article about Skorne as a whole, it invigorated me to play Hexy 2. I read the whole series of articles from Hand cannon, and in the first one, something jumped out at me: Hexy 2 was everywhere. He was on the list of most fun casters, the list of casters to play, the list of casters to start with and to get experienced with. I’d made a semi-resolution to play a good caster or two in Skorne until the end. This guy seemed to be where I I should focus if I wanted to play a top notch caster.

I was not disappointed

In the last few weeks, including a local tournament, I’ve now 5-4 with him. 3 of those losses were the first three games I played with him, learning his tricks and getting his brute killed top or bottom of turn 2 because I’m stupid.

Its a very solid list. The Gladiator and Paingivers give out the basics of the faction: +2 speed, free Charges, and +2 Str. The Agonizer and the Krea prevent most beasts, and most shooting from doing a whole lot of damage. The Willbreaker, Taskmaster, and Soulward are all their providing support as needed. I got a pair of games in with it and was completely sold. I knew that I wanted something very close to this list.

After those first two – three games, a number of points stood out to me.

The above thoughts transformed my list into something I thought would better fit the tasks I was asking it to perform.

This, accidentally on my part, transformed the list into something of a nightmare against shooting. I only added the Keltarii when I started putting it all together in my head. Agonizer, Krea, Two Shield Guards at arm 21+, Ashen Veil. There was little this army feared from guns. Putting the Keltarii in there made it so that I could have either Gators and Keltarii at Def 15 v. Shooting, or I could Skyrocket the Keltarii if the need arose.

Additionally, I wanted to get more out of Black Spot – a single unit of Slingers was not going to make up for casting the spell and the loss of the Bronzeback meant that I was going to need to find a way to clear out a unit of Infantry. Nihilators are an immediate choice, but they will, and often, kill each other and can get tied down. Keltarii suffer from neither of those drawbacks and can easily extricate themselves from any jam, kill up to two models apiece with their reach, and then continue into the heart of the enemy, allowing slinger to also take advantage of black spot on the same targets, often aiming, without worrying about them being in combat.

Keltarii were exactly what I was looking for, and as I don’t really feel right without 3 or more units on the board, this was right up my alley.

In more casual games, I really like swapping the Keltarii and Swamp Gobbers out for an Animantrax. Its not particularly world shaking, but it can cause some problems of its own.

What I like about this list is that it plays a very adaptable game. This is not immediately apparent because all of the parts of the list are hyper specific and want to be able to do their job. Krea wants to be across from ranged, Tiberion from the strongest Enemy. Brute across from infantry. Slingers near the brute, alongside the Keltarii. Gators want to be across from strong melee opponents to jam them out, and because guns/magic from range lessen their armor. They also like to be across from models that aren’t fearless, because on again-off again terror is a real treat.

What I have discovered, though, is that most often your opponent is going to try and decide these matchups for you, and that this list is completely capable of handling that. Depolying the Krea, Tiberion, Brute, Agonizer and Hexeris together is a pretty solid strategy for keeping the important pieces safe, but can easily break up depending on what your facing.

One of the key aspects of this list is that it can start to break apart the opponents lines pretty easily, forcing your opponent to start covering portions of the board that they didn’t know needed covering.  The feat turn helps out with this, shooting two ashes to ashes out into the army, backed up by a black spot, Keltarii and Slingers, and all the sudden a portion of board presence can simply evaporate. with a 10″ range and a 9″ command and a 5″ bounce, , you can touch someone out 24″ from Hexeris, blowing off support, gutting units and causing havoc. It can also only tag 4 guys during the feat, but it could also blow out 14. High Variance for High Power.

While each piece plays to their own tune, almost everything plays for at least two methods of play. Almost everything plays well to attrition holding down zones and flags, taking a disproportionate amount of resources to dislodge and getting either multiple attacks or high value from the attacks due to target priority or high power.

The Brute, along with the Krea and Agonizer, play the game pushing Hexeris towards assassination. His ability to lob up to 4 hellfires (three at -2 defense) at varying levels of boost makes him scary to casters with medium armor. Ashes to Ashes makes him feared by casters with light armor, and Tiberion and the Gladiator make it difficult for casters with High armor.

Scenario is how he wins if everything goes south and he is unable to really get in good with his assassination. With attrition so strongly in his favor, judicious use of Black Spot, Ashes to Ashes and Ashen Veil can really put the pressure on the opponent to try and stop you from overwhelming them, leading them to possibly leave the Scenario open for either an inevitable win at the end of the game, or a quick bang-bang score that lets you tag out swiftly.

If you can’t see me, I’m eating my hat. Its disgusting, but it needs to be done. Hexeris is not only powerful, he is also very, very fun to play. There is a learning curve, one that, had I not been playing Skorne for almost a year at the time, would have been pretty brutal. As it was, I had to get used to a large contingent of models I’d not used anywhere else with spells that aren’t similar to anything else we have.

It was worth it. When I come back to Skorne in 2-3 years, I’ll be itching to pick up Hexeris 2 and try him out with whatever new toys have popped up since then, It’ll be a joy. Unless the game has collapsed under the weight of colossals, but who knows what the future holds!